Character Creation for Mass Effect 3 allows players to fully customize their hero. When you create a new character, you will be given the opportunity to choose a gender,  name your character, define a facial profile through a vast array of sliders, select the Class, choose a Psychological Profile, etc.

Playing any of the previous Mass Effect games will allow you to import your character. This includes the back story and brings along all the decisions that were previously made. This allows players to continue with their previously created character while allowing modifications to the character's appearance and Class.

Players can also choose to start a new character, and during the initial playthrough of the game. You can choose to begin with a customized appearance or a default appearance. During customization, different presets are also available to start off the facial reconstruction. A character's psychological profile can be modified and will have a basic description of what type of experiences the character has undergone. A completed profile review will show the new preferred Name, Origin, Reputation, Class, and Combat Loss.

After starting a New Game,  players can choose an experience that can be changed anytime in your options menu.

Jump right into the action as the iconic Commander Shepard.

Customize your character. Experience and control the interactive story without difficult combat.

At this stage, players can modify different aspects to define their preferred facial profile. There will be a default appearance available as well. In custom appearance, aspects such as Facial Structure, head, eyes, jaw, mouth, nose, and hair are all modifiable features.

This is where players can select a military class available. There are six base Classes that each define the characteristics of a player's combat and abilities. These Class types are carried over from previous Mass Effect games.

During Character Creation, players may choose the default appearance available for Commander Shepard. This is available in both male and female forms.

If choosing to customize the character appearance, players can choose to Cycle Presets available or modify each feature themselves. The modifiable features can be found below: 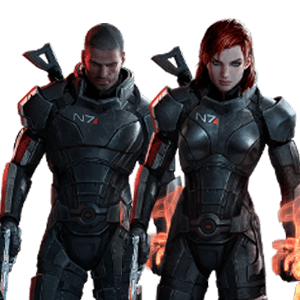 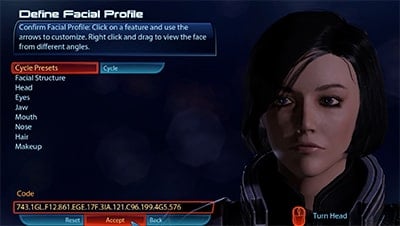 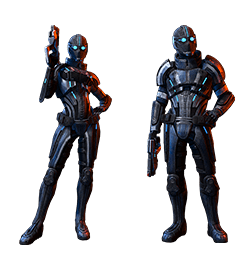 Adepts are biotic specialists, capable of disabling and killing enemies with raw biotic power. While they lack advanced combat training, they are the best at defeating enemies without firing a shot. They are outfitted with L5x implants that can spawn a micro singularity, damaging enemies and pulling them into the air. 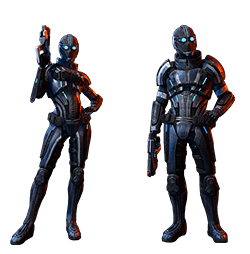 Sentinels are unique bringing both tech and biotic abilities to the battlefield. In addition, to complete weapons training, Sentinels are equipped with an advanced shield that makes taking cover much less necessary and rushing their enemies much more productive. This armor system can also be detonated to blast nearby enemies. 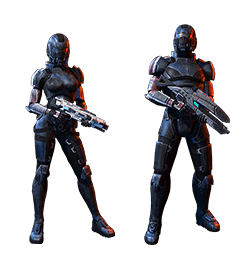 Engineers are tech specialists, the most effective class at disabling the defenses of the toughest enemies or incapacitating them to render them harmless. In combination with their weapons training, Engineers have the unique ability to spawn combat drones that can harass enemies or force them out of entrenched cover positions. 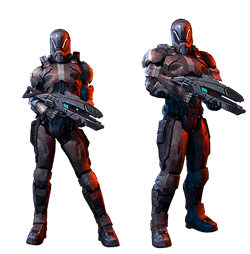 Soldiers are pure combat specialists: no one is tougher or more suited to taking down enemies with barrages of gunfire. Soldiers have thorough weapons training and can use all special ammo types as well as grenades. High-level operatives are outfitted with ocular synaptic processors that allow them to focus on targets with lethal accuracy. 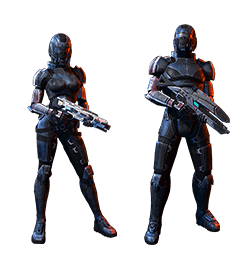 Infiltrators are tech and combat specialists with the unique ability to cloak themselves from visual and technological detection. Their inventory is stacked with a wide variety of weapons, equipment, and powers. Infiltrators are deadly at any range, but particularly so with a sniper rifle. When scoping a target, superior reflexes take over, time momentarily slows down, and the Infiltrator finds an easy picking. 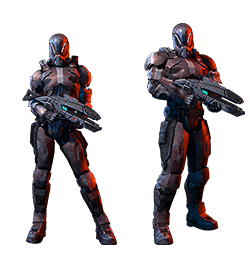 Vanguards are feared for their high-risk, high-reward combat style, closing quickly on enemies and destroying them at short range with weapons and biotic abilities. They are outfitted with L5n implants, enabling them to perform a biotic charge that strikes the opponent with incredible force while bringing the Vanguard in for close-range combat.

After the first Mass Effect 3 Playthrough, players will have access to additional Bonus Powers that have previouslu been unlocked. The list will show all available bonus powers unlocked from a player's accomplishments. During this stage, you may select one Bonus Power.

This is the complete list of possible additional Bonus Powers in case you have already unlocked them all:

This stage determines the details of the character's personal history. This selection creates the character's backstory and service history and determines how the characters react during gameplay based on their personality and experience. Their psychological determines their Service History for Reputation, Origins, and Combat Loss.  This option predetermined if importing a character from a previous Mass Effect profile based on gameplay.

Both of your parents were in the Alliance military. Your childhood was spent on ships and stations as they transferred from posting to posting, never staying in one location for more than a few years. Following in your parents' footsteps, you enlisted at the age of 18.

You were born and raised on Mindoir, a small border colony in the Attican Traverse. When you were sixteen slavers raided Mindoir, slaughtering your family and friends. You were saved by a passing Alliance patrol, and you enlisted with the military a few years later.

You were an orphan raised on the streets of the great metropolises covering Earth. You escaped the life of petty crime and underworld gangs by enlisting with the Alliance military when you turned eighteen.

During your service, a mission you were on went horribly wrong. Trapped in an extreme survival situation, you had to overcome physical torments and psychological stresses that would have broken most people. You survived while all those around you fell, and now you alone are left to tell the tale.

Early in your military career, you found yourself facing an overwhelming enemy force. You risked your own life to save your fellow soldiers and defeat the enemy despite the impossible odds. Your bravery and heroism have earned you medals and recognition from the Alliance fleet.

Throughout your military career, you have held fast to one basic rule: get the job done. You've been called cold, calculating, and brutal. Your reputation for ruthless efficiency makes your fellow soldiers wary of you. But when failure is not an option, the military always goes to you first.

If playing a completely new game, this selection determines a gameplay decision in the previous Mass Effect games that led to a loss in the story. This then determines who lives and and affects Mass Effect 3 gameplay and how Shepard will then react to certain aspects of the new game.

The deaths of numerous squadmates and friends have begun to play a significant role in Commander Shepard's psychological profile. The burden of inevitable combat loss after so many high-risk missions weighs heavily on Shepard.

Lieutenant Alenko was killed in action-- the direct result of an order issued by Commander Shepard. The only other survivor of the incident was Gunnery Chief Ashley Williams. Shepard and William's shared loss of Alenko created a strong bond between them, although the incident has had a lingering psychological effect.

Gunnery Chief Ashley Williams was killed in action-- the direct result of an order issued by Commander Shepard. The only other survivor of the incident was Lieutenant Kaidan Alenko. Shepard and Alenko's shared loss of Williams created a strong bond between them, although the incident has had a lingering psychological effect.